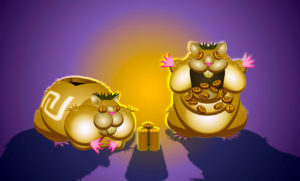 An oger is a large, coin-filled piggy bank hamster. In the “Milhamah” universe, ogers usually live in the Oger Reservoir, where they hoard scrap and war booty by either eating it or sticking it into their backs.

Under Arigah’s authority, the oger hamsters help organize the booty, and when they are ready to deliver or deposit it, they spit out their contents.

Ogers eat and store up money because they are based on the אגר shoresh root, which deals with hoarding and wages. Oger literally means “hamster” in Hebrew, and the root also connects to “agorah,” which is 1/100 of a shekel.

Ogers are typically friendly with people, and they only attack if provoked.

They are expected to first appear in Issue #3.

We use cookies to ensure that we give you the best experience on our website. If you continue to use this site we will assume that you are happy with it.OkNoRead more
Revoke Cookies