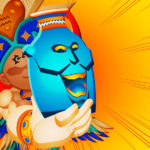 It’s time to reveal an update after several days of comic creation!

“Milhamah: Fighting Words” Episode 8 has all its panels complete and is in its final editing stages for a Tuesday release. All that’s left is a few sound effects and some reformatting for the webcomics platforms. (Above is a preview revealing the villain Deli in all his arrogant glory.)

Meanwhile, I’ve been doing new character concept sketches. We finally have profiles for the Holy Tongue Society’s pronoun and verb characters, and my next goal is to vectorize them over the next couple of weeks. I also plan to do some digital painting of a concept based on the main villain. A couple of minor villains that will appear within the next few episodes also have their concept work done.

And for more good news, I’ve been getting my online store ready to launch. I made two T-shirt designs and will have a sample or two printed by next week. That way I can wear it to a marketing event next month.

Soon you’ll be able to buy the shirts online too, along with art prints and maybe stickers. Right now I’m leaning toward selling merchandise on Redbubble and TeePublic, though Amazon and Printful appear tempting too. Exciting things are ahead!